Mahindra Thar is one of the most popular 4×4 SUVs in the country at the moment. Ever since the launch of current generation Thar, we have been seeing several modification videos of the SUV. Many of the owners modify the SUV to enhance the off-road capabilities of the SUV while some modify the SUV to make it look more premium. Just like the previous generation Thar, you would hardly find a Mahindra Thar in its stock form. Here we have one such modified Mahindra Thar that gets 9 inch lift and comes with modifications worth over Rs 10 lakh.

The video has been uploaded by HER GARAGE on their YouTube channel. The Mahindra Thar seen here in the video is actually from Jammu and the owner has modified the SUV for extreme off-roading. He can be heard saying in the video that he never had modifications in mind when he bought the SUV. He already owned a previous generation Thar which he had modified for off-roading. He initially thought of keeping the new Thar stock but, over a period of time, his mind changed.

Also read: Buying a pre-owned Mahindra Thar is better than buying a new one: 5 reasons

He made several modifications to the SUV before getting it to look like this. Starting with the front, the stock grille and the headlamps have been replaced with an aftermarket unit. The front bumper has also been replaced with an off-road spec metal bumper. The bumper gets projector fog lamps and there are tow rated shackles and an electric winch attached to the chassis. The underbody protection is done using thick metal sheets. There are metal covers for DPF and fuel tank as well. Coming to the suspension, they have been replaced to an aftermarket unit that are suitable for off-roading. The suspension tuning is adjustable. 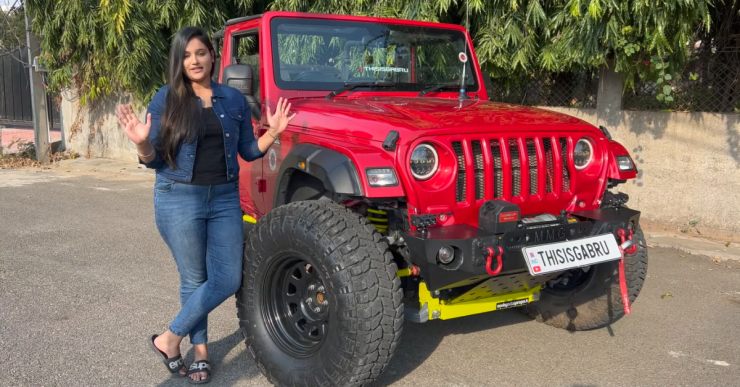 The link rods, lower and upper arms have all been replaced. A 5 inch lift kit has been installed on this SUV and rest of the job is done by the new set of tyres. The 18 inch alloy wheels have been replaced with metal off-road rims and the rims are wrapped with 37 inch RT tyres. The bumper has been designed in a way that it does not get in the way of the tyre. Coming to the side profile, the foot rests have been removed to increase the ground clearance even more. This is a convertible soft top SUV and the modifications go well with the overall look of the SUV.

At the rear, the stock tail lamps have been replaced with an aftermarket LED unit and the bumper is a metal off-road unit. The spare wheel is a 37 inch which is mounted on a bracket specially made for it. The weight of the wheel does not fall on the tail gate but, on the chassis. The rear wheels also get disc brakes which improves the overall performance. The owner mentions that he did not buy a Wrangler because he was not sure about the aftersales and service network. He has damaged several parts on this SUV and they are all readily available from the service center. He mentions that, in future he would be making more changes to the SUV and would also remap the engine for more power.